They all boast superiority to previous rounds, whether that’s in range, velocity, energy, or accuracy. Some of them manage to achieve mainstream popularity, some earn a small but loyal cult following, and others fade away pretty much unnoticed.

.224 Valkyrie is one of the latest rounds to hit the market, officially introduced by one of the biggest, most reputable ammo companies, Federal Premium, at SHOT Show in 2018. Since then, it’s gotten quite a bit of attention.

While it’s not yet clear if .224 Valkyrie will make it to the mainstream, it’s certainly earned some enthusiasts.

Maybe you’ve heard the buzz and want to know more, or maybe this is the first you’ve heard of the new round. Either way, we have all the info you should know about this enticing new round right here.

Heads up: if you’re not very familiar with ammo terminology, you may want to give our Bullet Caliber Guide a read before you get started for a primer on ammunition basics, or at least have it open in another tab for reference.

At its core, .224 Valkyrie is a necked down version of Federal’s 6.8 Remington SPC that uses a .22 caliber bullet — specifically a .224 diameter one.

This leads to a round that’s very similar to .223, but with a shorter, slightly wider casing and a longer bullet, but with much greater velocity and a higher ballistic coefficient. If you’re familiar with .22 Nosler, introduced just a little earlier in January of 2017, it’s a similar concept.

So how exactly does that work?

To find out, we have to dig into some physics.

Basically, .224 Valkyrie is made so the bullet goes very fast and stays that way for a long time.

If you’re satisfied with that being the extent of your knowledge and understanding, feel free to skip on down past the following couple of sections. Otherwise, let’s go deeper.

.224’s main claim to fame is that it stays supersonic — faster than the speed of sound — far longer than just about all other short-action cartridges. In fact, it even outdoes several long-action cartridges as well.

This makes the round highly consistent and allows you to make accuracy adjustments very easily with the use of a ballistics calculator or just your own math skills.

Let’s look at how the velocity .223 compares to that of .224 according to Federal’s own ballistics calculator, set to sea level and 68 degrees Fahrenheit.

At the same elevation and temperature, the speed of sound is roughly 1,125 f/s. As you can see, both rounds start at even more than twice that with the .223 actually going just a touch faster. But by the time they reach 1,000 yards, only the .224 is still supersonic.

For the curious, the .223 dropped to subsonic speeds at almost 800 yards, while its .224 counterpart won’t do so until it reaches almost 1200 yards.

The obvious advantage of this is that the faster a bullet moves, the quicker it reaches the target. That means moving targets have less time to move and, by extension, you have less movement to compensate for.

For both moving and standing targets, it also means that there’s less time for external factors like gravity and wind to affect the bullet’s trajectory, so once again there’s less for you to compensate for.

In addition, as long as a round maintains supersonic speeds, it behaves consistently and predictably, but the actual drop to subsonic speeds itself can cause the bullet to behave much less predictably, which just compounds with the effects of other factors like gravity and wind.

Let’s see how that actually plays out by comparing the drop and wind drift (with a 10 mph crosswind) of the same two rounds we compared above, and in the same conditions.

Clearly, we see far less drop and drift from the .224 Valkyrie round, which means far less compensation you have to make in your shots or adjustment you have to do to your optics.

One last difference we have to discuss is bullet mass. Though you can certainly find some .223 ammo with more massive bullets than some .224 ammo, on average, .224 Valkyrie has a larger projectile.

That, coupled with the round’s higher speed, means that the bullet has more energy when it hits its target.

That’s not particularly important if you’re just shooting targets, but if you need to be able to take down a living thing, whether you’re a hunter, a law enforcement officer, or are in the military, terminal ballistics matter.

Once again, we see .224 Valkyrie come out on top with more than twice the energy of .223 Remington.

This makes getting fatal shots to medium game much easier.

Of course, this all varies based on factors like temperature, altitude, and the particular rounds in question, but the trends remain the same.

But why does .224 Valkyrie perform so well?

Before we go any further, you need to know what a ballistic coefficient is, so let’s start with a little vocab lesson. Fair warning: there’s a math lesson here, too.

The coefficient of form is determined using one of several different models, but for our purposes, you can just think of it as something like a drag coefficient.

It serves to show how well the projectile handles air resistance and is inversely proportional to negative acceleration – deceleration, in layman’s terms.

That means that a high ballistic coefficient means the projectile is losing speed slowly which translates to a bullet that maintains a higher speed for longer distances since drag is low compared to the bullet’s mass.

All of that is to say, basically, the higher the ballistic coefficient the better, since that means it suffers less from drag.

At this point, you’ve probably guessed that .224 Valkyrie has a high ballistic coefficient.

Remember, bigger is better, and our .224 round dwarfs its .223 Rem competitor, and even has a higher ballistic coefficient than the 6.5 Creedmoor and .308 Win rounds, despite their much larger mass.

When we said earlier that .224 Valkyrie performs more like a long-action round than either .223 or 6.8 SPC, this is what we were talking about.

And while long-actions rounds typically require the AR-10, with a 6.8 SPC bolt and a .224 barrel, .224 Valkyrie is compatible with the more compact, more affordable AR-15.

You can even use your .223 mags, though you won’t be able to load them to the same capacity. You also probably want to test them with a few rounds first to ensure that they feed smoothly. Metal GI mags, in particular, have been reported to have problems with .224 Valkyrie.

A 6.8 SPC mag will typically be more reliable since they’re made for the same thick cartridge casing that .224 Valkyrie has.

Before you buy, let’s talk about whether you really need to make the leap.

.224 Valkyrie is an excellent long-range, light recoil cartridge for target shooters and hunters, whether you’re experienced with long-range shooting or are looking to get started.

If you’re regularly shooting distances around 1,000 yards, or plan to in the future, a .224 AR-15  is a great investment to get greater accuracy compared to .223 and a lighter weight platform compared to long-action rounds, not to mention the fact that .224 Valkyrie also tends to run cheaper than comparable long-action rounds.

On the other hand, if you never shoot more than a few hundred yards, you could probably skip .224 or would at least be well served by waiting a little bit until prices decrease and your options, both in terms of rifles and cartridges, increase.

Since .224 is still so new, there isn’t a huge breadth of cartridges available yet.

Federal, as the round’s originator, has the most options.

The one we used for comparisons, this particular .224 round is one of our favorites.

.224, in general, was designed for long-range accuracy, and this line of match grade rounds is designed to improve that even further with thicker jackets, Sierra bullets, and sensitive primers.

They’re pricier than other .224 rounds, but the performance of this ammo is pretty much unparalleled. 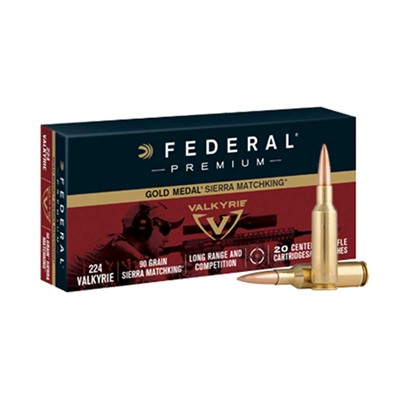 25 at Brownells
Get It

Small varmints can be tough to hit, especially at long distances, so .224 Valkyrie is a great round for dealing with varmints and predators. This particular cartridge was designed to maximize the round’s utility for this purpose.

With a thin jacket, boat tail, and polymer tip, this lightweight round is ideal for taking care of varmints and predators. It delivers a quick kill with minimal external damage, great for those of you who want to make use of the animal’s pelt.

Sure, it doesn’t have the accuracy of Matchking, but with a ballistic coefficient of .270, it’s still more than suitably equipped for its job.

30 at Federal Premium
Get It

This full metal jacket round is our recommended .224 Valkyrie round for training and plinking.

It’s more affordable than Matchking, but is still made from excellent components and still has excellent ballistics with a ballistic coefficient of .400. Its reliability and accuracy, combined with its lower price, makes it excellent for getting used to .224 Valkyrie or to a new .224 Valkyrie rifle. 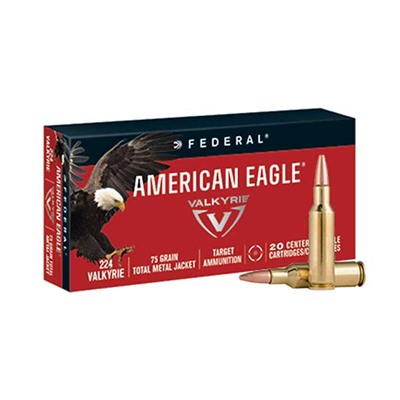 11 at Brownells
Get It

Finally, you need something to actually shoot those rounds out of.

If you already have an AR-15, the easiest route is to just pick up a .224 Valkyrie upper and swap it for the one in your AR.

We like the Palmetto State Armory (PSA) .224 Valkyrie Upper for its accuracy, comfort, and affordability, but tons of manufacturers are making .224 Valkyrie uppers these days, so if you have a preferred manufacturer, be sure to check what they have too. 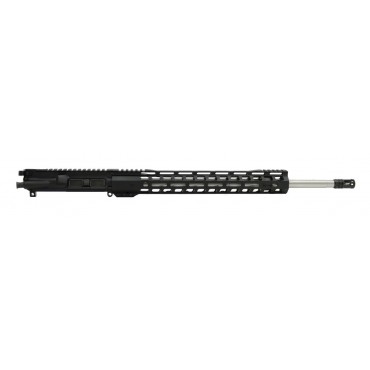 360 at Palmetto State Armory
Get It

Alternatively, you can swap out the bolt and barrel, but this is an option best left for people who have experience with taking apart and modifying uppers, and are comfortable doing so.

Remember, since it’s the same case, .224 Valkyrie uses the same bolt as 6.8 SPC, which is quite well established, so you have a lot of options here. You can also go with either a complete bolt carrier group or just get a bolt assembly to put into your existing bolt carrier group.

For a barrel to go with it, look to companies like PSA, Faxon, Ballistic Advantage, and CMMG. Brownells also makes a solid .224 Valkyrie barrel. We particularly recommend going with a carbon fiber option to take full advantage of the lightweight AR-15 platform.

For the easiest route, you can also just go with a completed rifle.

.224 Valkyrie may still be a newcomer to the ammo world, but it’s already made a big splash.

Its reputation is well earned: this round’s ballistics are pretty spectacular and it opens up some exciting new possibilities for long-range shooting with the convenience of an AR-15.

Plus, if you already have an AR-15, you can just modify it instead of buying a whole new gun, which not just saves you some hard-earned cash but also ensures that you can use most of your current gear.

As you can probably tell, we’re really excited about .224 Valkyrie and we bet you are too. Fortunately, it doesn’t appear to be going anywhere any time soon.

But are your thoughts on .224 Valkyrie? Have you gotten an opportunity to shoot it and if so, what was your experience like? Have other questions about the round that we didn’t cover here? Let us know in the comments! Don’t forget to check out the best complete AR-15 uppers. 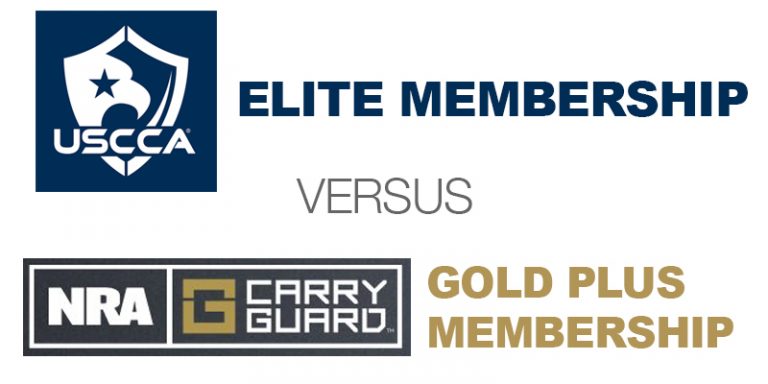 Very good read. Lots of good solid information to help solidify my decision to go ahead with my 224 build.

Why didn’t you compare 77 grain bullets for both. They would have the exact same b.c. And would be a more fair comparison